When Nordic moved to nRF52, started from nRF52832, the game changed. Even nF52832 still supports ANT+, the technology support such as SDK releasing or developers’ forums, has moved to direct supported by ANT+ Wireless (formerly Dynastream Innovations). Since then, Raytac suggest developers who is interested in ANT+ product still able to select the modules based on core specification and form factor, but access the firmware development support from ANT+ directly. Developers who are interested to know more about ANT+ is encouraged visit ANT+ FAQ support page first for more information about membership, development, resource and certification.

All Nordic nRF52 solutions supports ANT+ feature, developers may refer to below Raytac module map and find what the protocol supports by the symbol stated besides the Nordic solution indication.

END_OF_DOCUMENT_TOKEN_TO_BE_REPLACED

There is no panic for this PCN,  it is refer to module’s appearance changes only but no others. Raytac will remove YELLOW DOT marking on shielding for all modules produced based on Nordic nRF52832 (Build Code: EXX) V.2 SoC since 2020 (Date Code from 001).

In case there is anything unclear for this PCN , please do not be hesitated to contact Account Manger for further assistance. 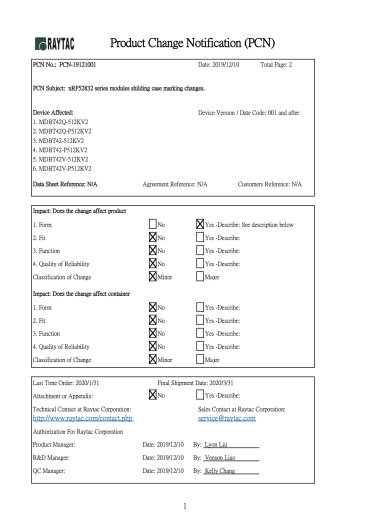 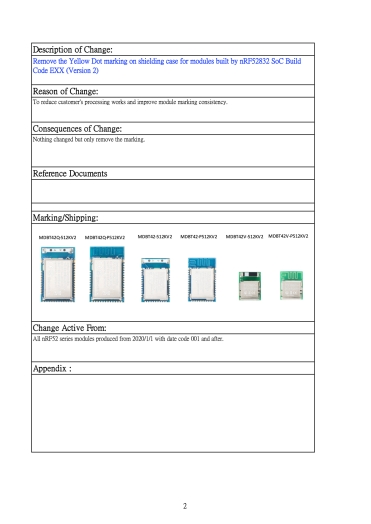 Standing on marketing perspective point of view, iPhone user are often been viewed as a higher contribution margin group. Not only talking about consumer behavior, but also the motivation looking for device integrated with their own iOS devices. That explains why HomeKit devices recently has been widely spreading out in Apple stores or shops.

Wireless technology, says Bluetooth or WiFi, is the key role to connect between devices for Apple HomeKit implements. Surely, Bluetooth is more applicable than WiFi, not only easier to connect to iOS devices but also much lower power consumption and higher security level to rich consumer’s experience.

Raytac has been devoting to Bluetooth Low Energy module development for several years, started from BT4.0 to the latest. Raytac modules has selected Nordic’s solution, which is a highly optimized solution running HomeKit Accessory Protocol (HAP) and application firmware. The ultra-low power even enhance the design and usability for HomeKit devices implements.

After MFi Licenses program jointed, Nordic nRF5 HomeKit SDK is capable to access, Raytac expects to escalate the support ability in terms of hardware and firmware aspects for all customers who are interested in Apple HomeKit implements.

Raytac nRF52 series module now has been updated to BT5.1

END_OF_DOCUMENT_TOKEN_TO_BE_REPLACED

Bluetooth has been around for quite some time, but that doesn’t mean that no one is a beginner when it comes to developing Bluetooth-based products. In fact, due to their recent updates, Bluetooth is becoming increasingly popular as demand for power efficient gadgets and wireless technology is increasing. Smart watches is just one of the many examples out there.

For each and every single one of these devices, you’ll first have to register your new product with Bluetooth-functions built in on Bluetooth SIG’s website. You will eventually register (and pay for) your product based on what version of the Bluetooth protocol that you’re using in the product and do so by purchasing a so called Declaration ID (DID).

Yes, a little exaggeration in the title, but that’s essentially what it comes down to. Bluetooth SIG is doing some major updates and changes to the Bluetooth protocol which includes getting rid of the more outdated versions.

There are quite a few versions of the Bluetooth protocol out there, but nowadays you will basically be advised to choose from 2 versions:
v.4.2 or v.5.0
These two versions would be, as I mentioned in the title, the two current versions of Bluetooth.

Although it might seem very simple at first, there are a few things that you need to understand the content of the announcements to fully grasp what these updates and changes mean. That, my friends, is today’s topic of this post.

What has changed recently is nothing new, but it’s big. What I mean is that similar changes have been done in the past, but since the market is more dependent on the technology now than before, it matters far more for people when the Bluetooth SIG do the same changes nowadays. Those changes are as follows:

This piece of information tells us that the process of withdrawing specifications comes down to two different steps, namely deprecation and withdrawal.
While deprecation literally means “to stop use”, it is in this case the first step in the process of making a certain Bluetooth specification obsolete.
Then there’s a time gap between a certain specification gets deprecated until it’s withdrawn. During this gap, as mentioned above, no new designs can be paid for and/or registered and unused DID’s will be invalid. This is only to prevent new devices with deprecated Bluetooth specifications from being produced. To stop the “bloodline” of those specifications if you will. During this gap, however, you are still able to add new products that implement the same fundamental design (e.g. version updates) as you wish.

After this gap is over, when the specification in question is actually withdrawn, you will not be able to add any new products to any existing designs.

If you’re a developer who is very familiar with Bluetooth already, this information might already be, as certain people refer it as, “peanuts”. If you’re new to the Bluetooth world, however, this is a lot to take in and you might want to read up more about it. We hope this explanation made things clearer for you though 🙂

Don’t forget that Raytac Corporation’s modules are all pre-certified with FCC, TELEC, IC, CE, RCM, KC and SRRC. The best part is that more is yet to come!
Take a look at our modules on our website: http://www.raytac.com

With over 1,000 exhibitors gathering in Nuremberg, Germany on 26 Feb.~29 Feb., 2019 , Embedded World has become one of  the biggest trade fair among the IoT Technologies.

END_OF_DOCUMENT_TOKEN_TO_BE_REPLACED

When you start developing your firmware for your Nordic nRF52832 solution-based Raytac BLE module, you will (like on most other projects) bump into some difficulties.

The other day, we had yet another case where a simple thing caused major difficulties for even some of the brightest people – a customer couldn’t get their GPIO direction bit to work.

Although not too difficult to solve, it’s a common error that most customers end up having on our modules and that is because Pin 0.09 & 0.10 are set to NFC per Nordic’s default settings. In order to be able to use these pins as normal GPIOs, you will have to change those settings.

The two pins I am talking about are the ones linked to the NFC-part to the far left in the circuit example below:

So, to convert these two pins to normal GPIOs, here’s what you need to do:

Check out the link below for a reference example on Nordic’s DevZone.

Raytac is glad to announce that we has expanded our distributor network to CIS Countries (Russia), Ukraine, Latvia, Lithuania. The distribution agreement covers sales, marketing, and support for Raytac Corporation’s full range of Modules lines, including Nordic’s proven nRF51 Series, nRF52 Series, and nRF52840 in the territory.

PR Electronics is a Distributor of Electronic components and Modules

with offices in Russia and Belarus. The company now has 51 employees and 4 sales offices.

With recent solid demand and positive feedback receiving from market, we strongly believe that IoT is the future to enhance people’s life.

With PR Electronics’s join of Raytac’s module distribution network, we truly expect he complementary of network portfolio can bring the opportunity and competitive advantage along with a speedy and convenient accessibility for developers.

After Nordic released nRF52840, the confusion raised what the difference between nRF52832. Raytac provided an easy comparison chart based on module solution hopes to provide a quick understanding in between.